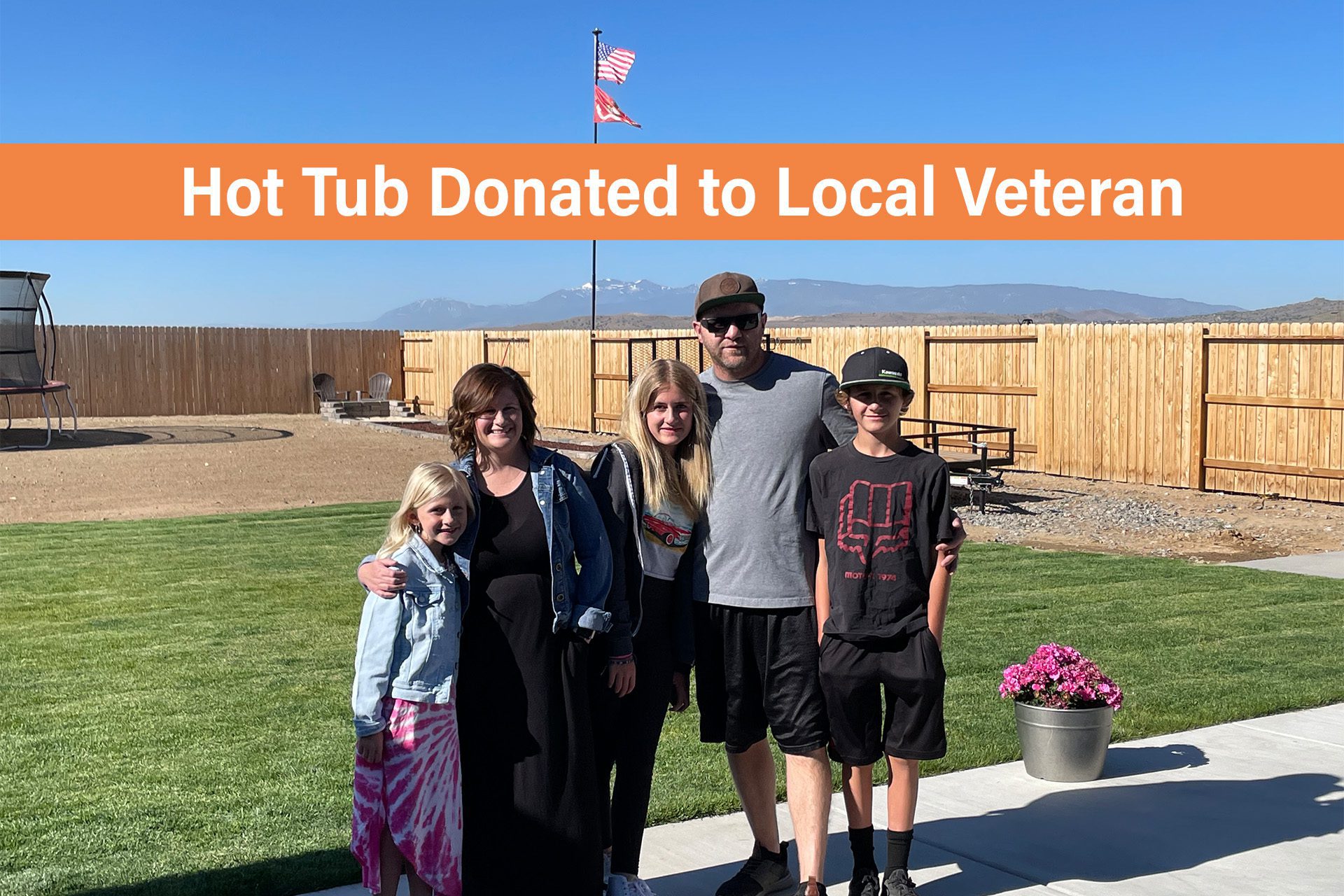 The Spa and Sauna Company, spa manufacturer Sundance Spas, and the charity Wish for Our Heroes teamed up to award a local veteran, Trent Robbins, a free Sundance Spa as a thank you for his military service.

Trent, who lives in Sparks with his wife and their three children, is a Purple Heart recipient who served in the Marines as a machine gunner between 2004 and 2008. He received his Purple Heart in 2006 after he was shot in the neck during his second overseas tour, in Iraq, all before he turned 21 years old.

He recovered and continued serving the remainder of his tour, but his four years of service as a machine gunner damaged his knees. He’s looking forward to the pain relief provided by hot tub hydrotherapy, as well as more family time.

About The Hot Tub for Heroes Program

This is the fourth time since 2018 that The Spa and Sauna Co., Sundance Spas, and Wish for Our Heroes have worked together to award a local veteran a free hot tub, through the Hot Tub for Heroes Program.

“We’re honored to be able to give back to our community in this way,” said Company owner Scott Clark.  “Helping veterans is a cause that is close to us personally at The Spa and Sauna Co., as we have team members who have either served or who have family members in the military. We thank Trent for his service and we wish him and his family many years of enjoyment in their new hot tub!”

Nationally, Sundance Spas, Wish for Our Heroes and spa dealers around the country have donated 77 hot tubs to veterans, since they began collaborating.

Wish for Our Heroes is “a national 501(c)(3), dedicated to providing resources to the “average” active-duty military member, in order to make their deployments a little easier, and to improve the quality of their family lives while home or during deployment,” according to their website. Learn more about Hot Tubs for Heroes or nominate someone here.

Trent, now 36, was awarded a Sundance Hamilton 780 Spa. From their new hot tub, Trent and his family will be able to view Mt. Rose and an American Flag and Flag of the United Sates Marine Corps.

The Robbins Family have a newer home and are currently renovating their backyard. One day, Amanda googled Hot Tubs in Reno and found The Spa and Sauna Co. website and learned about the donation and nominated Trent.

Not long after, Trent received a call saying he had been selected as this year’s recipient.

“We were very excited when we got the news,” Trent said, explaining how he initially didn’t even pick up the phone call and how surprised he, his wife, and their three children, Logan, Karlee and Brylee, were when they found out about the donation.

That excitement carried over through the delivery day, as he and his wife and children watched the hot tub being delivered into their yard. 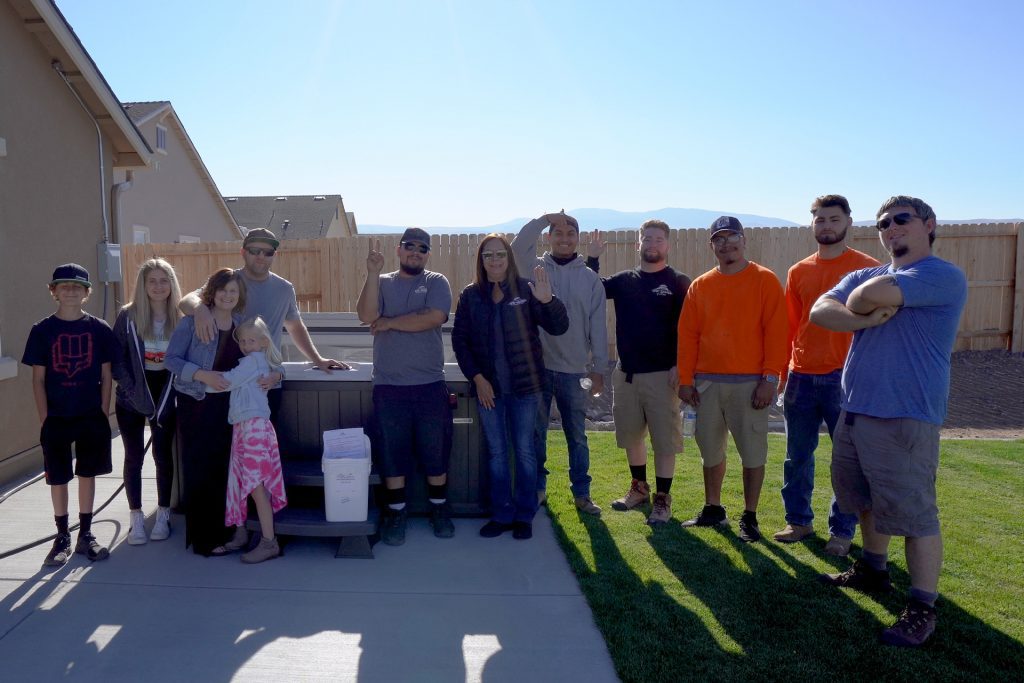 Trent and Amanda were high school sweethearts and when Trent signed up to enroll in the Marines, he joined the Delayed Entry Program, since he was still in high school. He left for boot camp one week after graduating from high school.

In her nomination, Amanda wrote: “Trent receives disability for his knees. He served two tours oversees as a machine gunner which caused him to have to carry his weapon, ammo, and gear on foot through villages and up and down mountains for days, weeks, and months during his time in Iraq and Afghanistan. Carrying such heavy equipment for so long wore down the cartilage in his knees, which has caused him chronic knee and back pain. A hot tub could help Trent to be able to relax his muscles, allowing him to have less pain and be able to do more with his kids.”

Back in the mid-2000s communication with members of the military was still quite difficult.

“I would go months without talking to him,” Amanda recalled.

The couple had their children after Trent completed his service.

Trent, who works at Western Nevada Supply, gives back to the local community by coaching the Spanish Springs youth wrestling program. His son is a member of the team.

Recently, The Spa and Sauna Co. checked in with two previous Wish for Our Heroes recipients, Daniel Rogers of Reno and Kevin Vogt of Sparks. Both said that having a hot tub has been life changing, providing muscle relaxation, stress relief and opportunities to connect with their children and relax after a long day.

“It’s a lot of extra time with the family which is what I was really looking forward to,” said Kevin, who received his donation in 2019 and is now retired from the military after 20 years of service.

We wish the Robbins family many years of happy hot tubbing in their new Sundance Spa!

Menu
We use cookies on our website to give you the most relevant experience by remembering your preferences and repeat visits. By clicking “Accept All”, you consent to the use of ALL the cookies. However, you may visit "Cookie Settings" to provide a controlled consent.
Cookie SettingsAccept All
Manage consent

This website uses cookies to improve your experience while you navigate through the website. Out of these, the cookies that are categorized as necessary are stored on your browser as they are essential for the working of basic functionalities of the website. We also use third-party cookies that help us analyze and understand how you use this website. These cookies will be stored in your browser only with your consent. You also have the option to opt-out of these cookies. But opting out of some of these cookies may affect your browsing experience.
Necessary Always Enabled
Necessary cookies are absolutely essential for the website to function properly. These cookies ensure basic functionalities and security features of the website, anonymously.
Functional
Functional cookies help to perform certain functionalities like sharing the content of the website on social media platforms, collect feedbacks, and other third-party features.
Performance
Performance cookies are used to understand and analyze the key performance indexes of the website which helps in delivering a better user experience for the visitors.
Analytics
Analytical cookies are used to understand how visitors interact with the website. These cookies help provide information on metrics the number of visitors, bounce rate, traffic source, etc.
Advertisement
Advertisement cookies are used to provide visitors with relevant ads and marketing campaigns. These cookies track visitors across websites and collect information to provide customized ads.
Others
Other uncategorized cookies are those that are being analyzed and have not been classified into a category as yet.
SAVE & ACCEPT