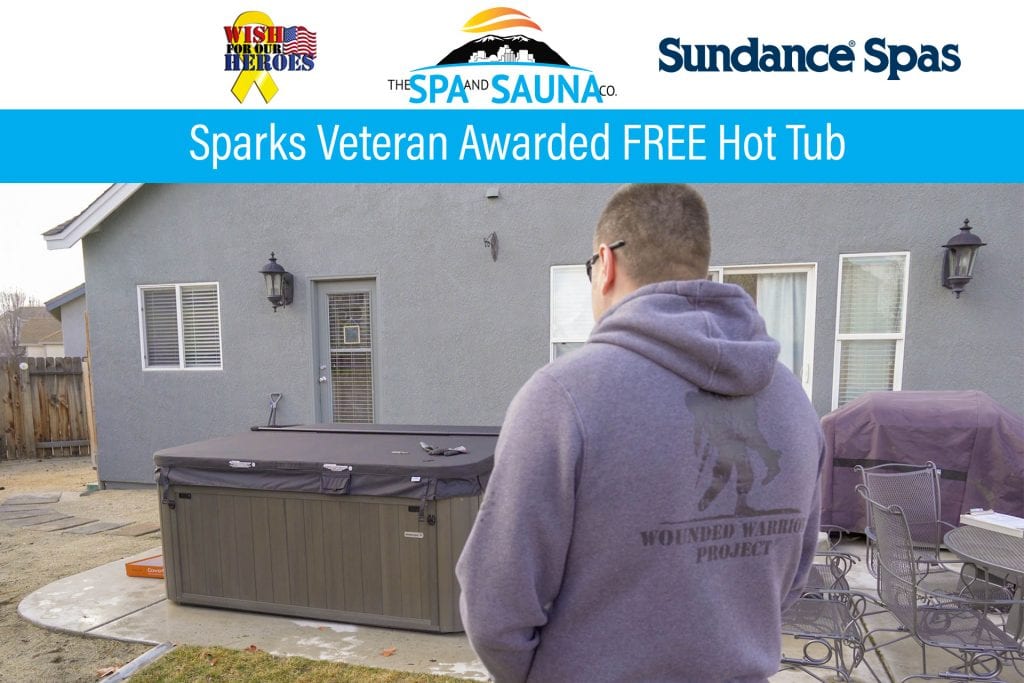 The Spa and Sauna Company, spa manufacturer Sundance Spas, and the charity Wish for Our Heroes have teamed up to award a local veteran, Kevin Vogt, a free Sundance Spa as a small thank you for his military service.

This is the second time in less than a year that the organizations have worked together to award a local veteran a free spa.

Kevin, who lives in Sparks with his wife and son, has been in the Army National Guard for almost 20 years now. He is currently a few months away from retiring. Kevin most recently served in Kuwait in 2016-2017. He has also served in Afghanistan, Iraq, and Egypt.

“We, at The Spa and Sauna Company, are honored to fulfill this hot tub donation, in conjunction with Sundance Spas and Wish for Our Heroes,” said Spa and Sauna Co. Owner Scott Clark. “We are incredibly grateful to Kevin for his Service to our country and the sacrifices he and his family have made during his many overseas deployments. We wish Kevin and his family years of enjoyment, family time and hydrotherapy benefits from their new Sundance Spa.”

Kevin, who has back and shoulder injuries from his overseas tours, is looking forward to the therapeutic value his new Hamilton 780 hot tub will provide. Although he has experienced daily discomfort from his injuries, there is no surgery available for him right now. Prior to receiving his hot tub, he relied on stretching for pain relief.

“I’ve had it recommended from several doctors – use hot tubs.”

Kevin started his military career in the Iowa National Guard at the age of 17 in 1999. He needed parental permission to join prior to turning 18.

“I decided military is what I wanted to do,” he said, as he explained how he graduated high school early, and spent what would have been his senior year of high school in basic training.

After joining, he attended the University of Northern Iowa, but was deployed overseas twice, so it took him 7 years to graduate. He married his college sweetheart, Courtney, and together they moved to Nevada about 10 years ago. They now have an 8-year-old son, Gavin.

On the day of delivery, only Kevin was around. Courtney was at work and Gavin was at school.

“My son is so ridiculously excited about this,” he said, of their new hot tub.

Kevin is planning to retire from the military this spring, after 20 years of service.

“It’s going to be a lot more time with the family,” he said, mentioning that he is looking forward to that, especially after time away during deployments.

Wish for Our Heroes is “a national 501(c)(3), dedicated to providing resources to the “average” active-duty military member, in order to make their deployments a little easier, and to improve the quality of their family lives while home or during deployment,” according to their website.

Together Sundance Spas, Wish for Our Heroes and Sundance Spa dealers around the country will have donated hot tubs to 35 veterans nationwide by the end of this year. The collaborative program, Hot Tubs for Heroes, was started in 2017. The organizations intend to continue donating hot tubs to veterans.

“Kevin was chosen because of his need of hydrotherapy due to multiple injuries in his back and shoulder from his service. We want to make sure Kevin receives the hydrotherapy he needs to have a better day to day life using our Sundance spa… Sundance Spas knows that hydrotherapy can be beneficial to our veterans suffering from injuries post service, which is why we’ve partnered up with Wish for Our Heroes and launched the Hot Tubs for Heroes Program nationwide,” said James Choi, Channel Marketing Manager for Sundance Spas.

This is the second spa donation in NV. Both were through The Spa and Sauna Company.

Kevin, and last year’s recipient, Daniel Rogers of Reno, actually know each other and have been on 2 deployments together. They currently belong to the same unit, although Kevin spent 9 years in Infantry before joining the Military Police.

“This is going to be a great way for us to relax and just be together as a family,” Kevin said, of his new hot tub. “Being overseas so many times, I’ve been away for a little bit so it’s nice to be able to do something together and to have something that’s going to relieve some stress. I’m pretty excited to have it.”

We wish Kevin and his family a lifetime of happy hot tubbing in their Sundance Hamilton Spa!