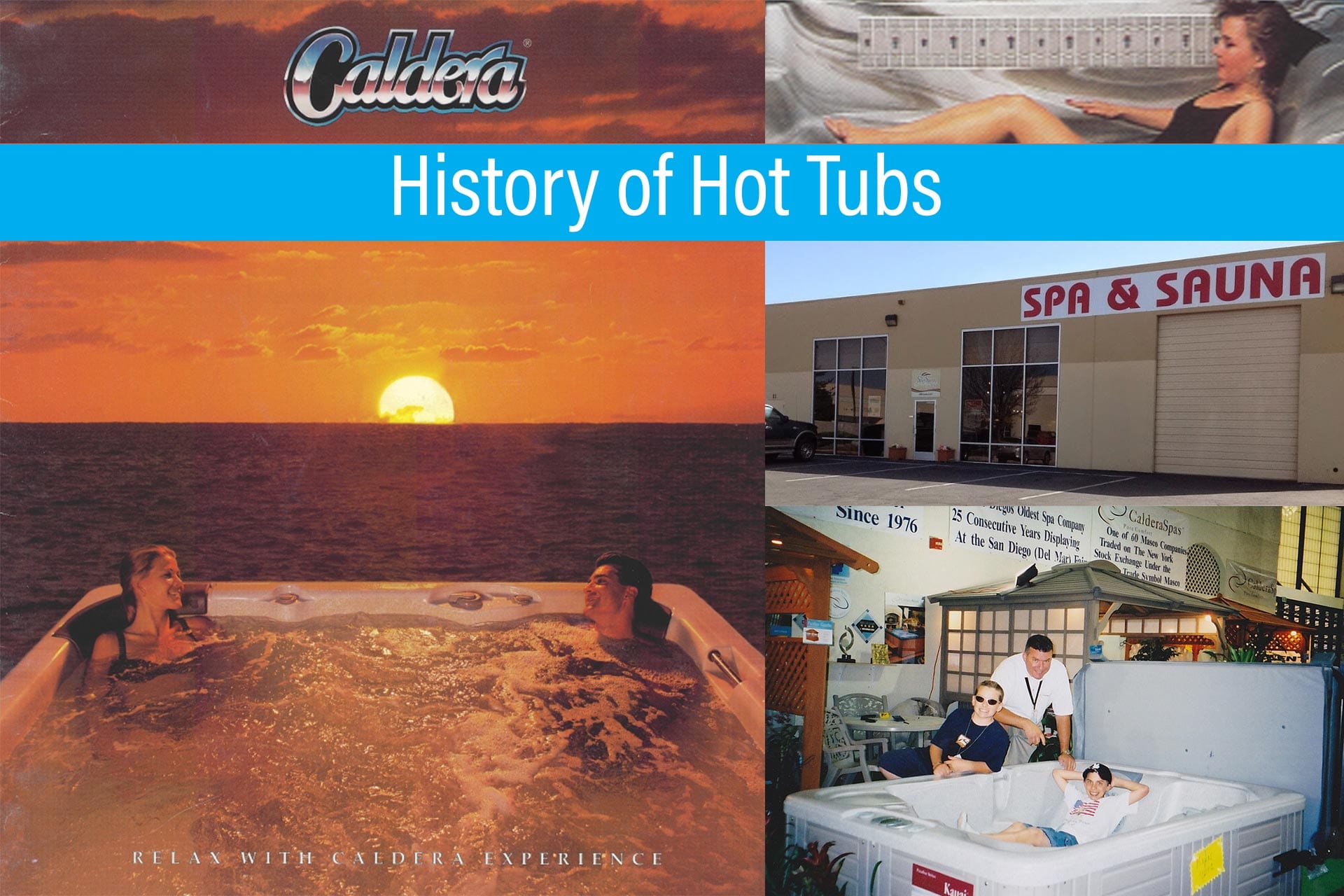 History of Hot Tubs and The Spa and Sauna Company

That hot tub you are sitting in might have the latest and greatest in terms of technological advancements, but you might be shocked to find out that the use of hot water baths for hydrotherapy and relaxation dates back to ancient times. Turns out people have known for thousands of years that a hot soak had health and wellness benefits.

This blog will highlight some of the early history of hot tubs, but also focus on The Spa and Sauna Company, which is celebrating 30 years in business in 2020. 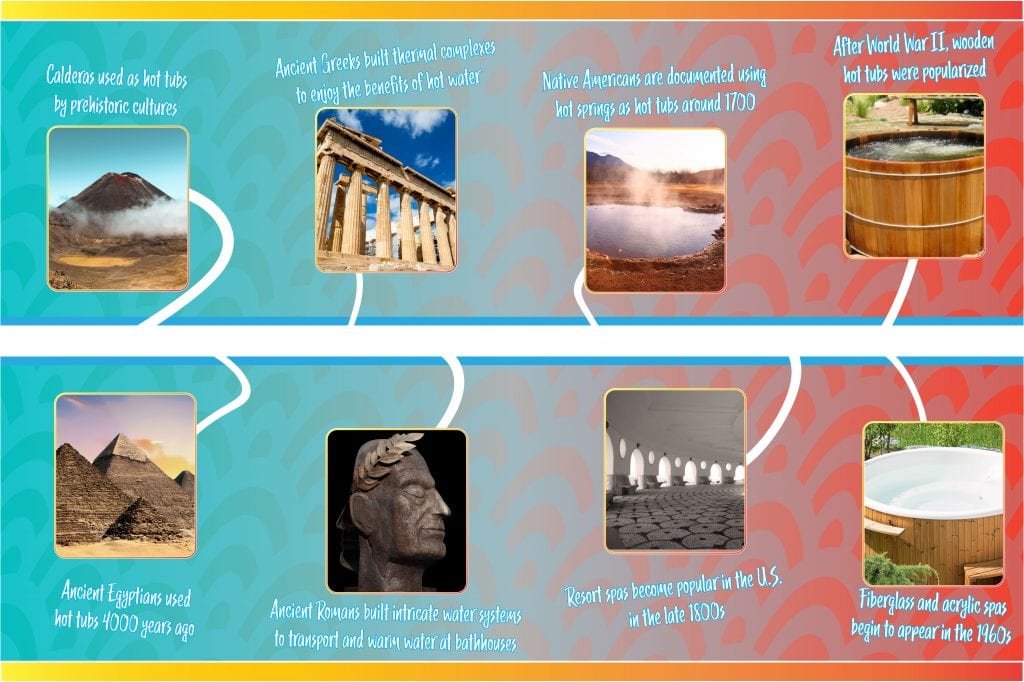 The earliest hot tubs were held in calderas, which are large volcanic craters, hence the name of Caldera Spas, linked so closely to the owners of The Spa and Sauna Company (but we’ll get into that later). Those calderas, unlike the hot tubs of today, may have been warmed by hot stones in the water.

Some Egyptians bathed up to 4 times per day! Can you imagine? The wealthiest Egyptians had bathing rooms inside their homes and as early as 4000 years ago used the therapeutic qualities of hot water in baths, adding flowers and essential oils for aromatherapy. Not too bad in terms of ideas, as essential oils and aromatherapy are still an enjoyable experience for many hot tubers today. They just come packaged as Spazazz aromatherapy products now.

Ancient Greeks believed water had the power to heal and built thermal complexes, with carved seats from rock. Ancient Romans developed intricate systems to move water from higher elevations to lower elevations and then warm the water and floors and walls of public bathhouses. Some of those baths stood the test of time and still exist today.

Ok, now that we’ve established that hot tubs are not a passing trend, let’s fast-forward a bit.

Native Americans in various parts of the United States from New York to Arkansas, embraced the healing powers of water. High Rock Spring in Saratoga, NY, was first used by Native Americans before colonists arrived. Later, Americans, including George Washington, were believed to have visited the area, known for its water healing powers.

In the late 1800s, spa resorts started popping up in Europe and the US. Many of these resorts were used to promote vitality and health.

Even President Franklin D. Roosevelt owned a spa resort that he visited yearly for decades. Roosevelt had been partially paralyzed at an early age, yet regained some of the use of his legs swimming at the springs. Hydrotherapy certainly isn’t a new concept.

Returning from Japan after WWII, American troops brought back the bathing culture used there to inspire the first wooden tubs in the US.

Wine barrels were initially used as hot tubs in the US.

Other people had recessed concrete spas installed next to their pools. By the late 1960s, in-ground spas featured the first jets. These concrete spas took weeks to install and were costly, which made them out of reach for the average American, unlike the hot tubs of today.

Fiberglass spa shells, which made their debut in the late 1960s, were better at retaining water than wooden spas and easier to install and maintain than concrete spas. These spas were quickly replaced by acrylic.

In the mid-1970s, spa shell manufacturers pulled these acrylic shells out of the ground to create the first portable spa. As the decade progressed, more features – that we have come to expect in today’s hot tubs – were added, including more advanced filtration systems and jets. Easier installation made portable spas attractive to many more homeowners. 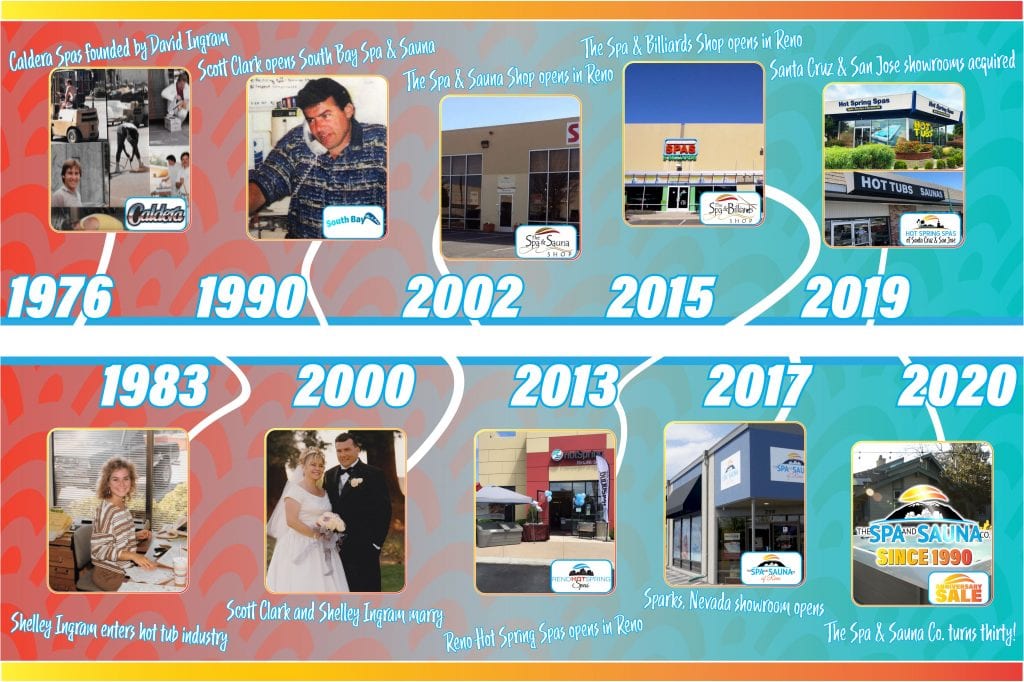 Here’s where the Ingram and Clark families begin to enter the story. We told you we’d get back here eventually.

In 1976, the founders of Caldera Spas, led by one of the Pioneer’s of the Hot Tub Industry, David Ingram, started building what has become one of the Leading Brands of Portable Spas manufactured today – Caldera Spas.

The hot tubs of the late 1970s and early 1980s were simpler than those of today, but these original hot tubs paved the way for the high-tech features we now take for granted.

Shelley Ingram-Clark, David Ingram’s daughter, started with the family business in 1983. She has rolled fiberglass, worked in manufacturing, handled accounting and marketing, and later worked as a sales rep. She knows the hot tub industry inside and out.

Later, in the 1999, the Ingram family sold Caldera Spas to one of the largest manufacturers of hot tubs today, Watkins Manufacturing, now known as Watkins Wellness. Watkins Wellness is The Spa and Sauna Company’s primary spa and swim spa manufacturer.

Scott Clark began working in the hot tub industry in the late 1980s, selling hot tubs at a Hot Spring Spa/Finnleo Sauna dealership in the Bay Area. In 1990, he opened his own store, in San Jose, called South Bay Spa and Sauna.

These days, even with 5 stores and 2 full warehouses to operate, you’re just as likely to find Scott moving hot tubs or setting the showroom floor, as you are to find him in talking to team members or planning for future endeavors. It’s easy to see his passion for all parts of the hot tub industry.

One day, while making sales calls for Caldera, Shelley stopped into Scott’s hot tub business in San Jose, which he had owned for 5 years by then.

They married in 2000 and have now been together for over 20 years.

After a brief period working traveling spa shows, the family and business settled in the Reno area in 2002 and opened their first Reno area store together, The Spa and Sauna Shop. At their first location on Louie Lane in Reno, the store featured Caldera Spas, Finnleo Saunas, and Brunswick and Olhausen Billiards. Today, that location is closed to the public and serves as a dedicated warehouse for the 3 Reno Showrooms. Now, The Spa and Sauna Shop is located in Sparks.

And co-owner Shelley is more involved with the business, now that their children are mostly grown.

Their children are involved too. Nick Clark helps out with the business in Santa Cruz, while Joey Clark is now the Lead Service Technician in Reno. Jacob Clark helps out in the Reno stores as well, and Carlee Clark stops in from time to time, but is still attending school.

“The Caldera Spas of Today, may not be My ‘Father’s’ Hot Tubs, but the foundation he built and the guidance he still gives to the Hot Tub Industry and Us as a Family, will live on for Future Generations,” Shelley said.

The Spa and Sauna Company has grown from a 1 shop location, originally in San Jose, California, to a 5- showroom business, in 2 states, with 2 dedicated warehouses, serving Nevada and California. In 2019, with the addition of the San Jose location, the Clarks have really seen their business come full circle.

In 2013, Scott and Shelley opened Reno Hot Spring Spas, at 6815 Sierra Center Pkwy., across from Target, in Reno, which is dedicated exclusively to Hot Spring Spas and the value line Freeflow Spas.

In 2015, they opened their largest showroom in Reno, at 9748 S. Virginia St., next to WinCo, just 2 miles away from the Hot Spring Store. That location had formerly been a spa showroom, known as Sierra Nevada Spas and Billiards. The Spa and Sauna Company flagship showroom features Caldera Spas and Sundance Spas, as well as Endless Pools, Finnleo Saunas, Saber Grills and Big Green Egg BBQs. Serving as the company’s headquarters, it also includes a service department, concierge valet hot tub cleaning service department, delivery department, marketing department, customer service department, plus offices, and a warehouse.

Later in 2019, Hot Spring Spas of San Jose was relocated and renovated at its current address 2627 S. Bascom Ave. in Campbell.

And now in 2020, The Spa and Sauna Company family of stores is celebrating its 30th Anniversary.

And it doesn’t seem like growth plans are slowing down.

The business survived and thrived through the Great Recession of 2008, as people were still looking for backyard and in-home relaxation.

Facing 2020’s global pandemic, The Spa and Sauna Co. continued to thrive, as interest in backyard leisure increased dramatically. Adjustments were made for so team members could work from home or work safely in office, as we provide essential water care for sale in store and online.

Scott and Shelley, who have always embraced advances in technology, used that time to make more technological improvements to all of their stores, and adjust the buying process too.

The Spa and Sauna Company also transitioned its largely in-person sales process, so that customers could shop for and buy a hot tub without ever coming into the store, if desired. Hot tub supplies are also available from our Online Store, and adjustments were made for curbside pick-up options. We are here to help you shop in the way that is most comfortable for you, whether that is in person, online or virtually.

Through the years, The Spa and Sauna Company has grown and evolved in many ways, from a company of just 2 people to nearly 50 people.

Over the years, The Spa and Sauna Company has won dozens of awards from its manufacturers, the local community in Reno and Santa Cruz, and small business associations. To see a list of all of the awards, click here. The Spa and Sauna Company has also been involved with community events, from local Duck Races and parades, to Toy Drives and Hot Tub Donations to Veterans.

“It’s been an amazing 30 years,” Scott said. “We’re honored to be a part of the hot tub industry. Hot Tubs truly are all about family and creating quality time and memories – especially in our case.”